Limpsfield’s favourite dress-up and party destination, Fancier Dress at Wickhams Stores, will have been a central part of the village for a decade on Thurs October 19th.

To celebrate 10 years of helping local parties be that little bit fancier, Fancier Dress is inviting customers – past, present and future – to help celebrate and have a snoop around their new premises at the back of their old shop, now inhabited by the Avalanche Gallery.  As a special treat, there’s 20% off all stock during the event.

Lucy Moore, owner of Fancier Dress and director of local theatre company, Threadbare Theatre has no doubt of her store’s value and popularity in the community, despite the early naysayers!

“Lots of people thought we’d only be around a year or so, but the local community came out in droves to support us from very early on” says Lucy. “The business took off straight away, word spread and within a year, I had to take on two staff members to help me.”

The historic building on Limpsfield High Street was owned by George Wickham, a “bottler and general storekeeper”. He ran a small brewery and general stores and produced Page & Overton’s Ales under his own name. He built “Wickham’s Castle”, now called Stonewalls (on the site of the old Limpsfield workhouse) and The Stores’ other incarnations have included Cullens (general stores) and The Wine Shop.

This amazing part of Limpsfield’s heritage was not in a great state when Lucy and husband, Richard took it on.

“When we bought the property, our surveyor said it would have been condemned within a year! But we weren’t going to let that happen, so we spent more than six months renovating, removing every piece of rotting timber and redesigning the upstairs flat. At one point you could stand in the shop and look up three floors to the rafters!  It was a huge project, but it would have been a real shame for such a lovely old building, standing right in the centre of the village, to have lain empty any longer.”

Thankfully their dedication paid off and the building and business has continued to thrive and grow for future generations, with Halloween being one of the main events of the stores and indeed the village!

“Halloween has grown from year to year as people embrace what was largely a more American tradition,” said Lucy.  “Local schools have dress-up days regularly and local people continue to embrace fancy dress as a great way to add some extra fun to a milestone birthday. We do a huge amount of 40th and 50th birthdays in particular.”

The business has definitely suffered with the ever-growing online market, but there will always be a place for Fancier Dress due to its dedicated and friendly personal service. There’s no substitute for Lucy and her staff, who guide customers step by step through the decision process, often tailoring outfits specifically to people’s requests. Their amazing range of hire costumes are as unique as the store, so you won’t turn up to a party and find five other people wearing the exact same outfit, which is often the case with online purchases.

Recently Fancier Dress moved to the beautiful two-storey barn at the back of the stores and made way for the Avalanche Gallery at the front.

“The barn was really just my own hoarder’s’ heaven, where I kept costumes that didn’t hire but that I couldn’t bear to part with!” admits Lucy.

However as an active member of the Limpsfield traders association, Lucy was aware of the need for new blood in the village, and so after much discussion, she decided to share their lovely space with a new business.

“I gradually sold off the ex-hire costumes to make room, and when we found out that Nick and Sarah from the Avalanche Gallery were looking for a space, we decided to bite the bullet and make the move. Most of our customers have actually commented that they prefer the new location and we all think it works really well. I particularly love the retro room upstairs!”

Everyone is invited to head to Fancier Dress on 19 October 5-8pm for a glass of wine and browse through the new space. 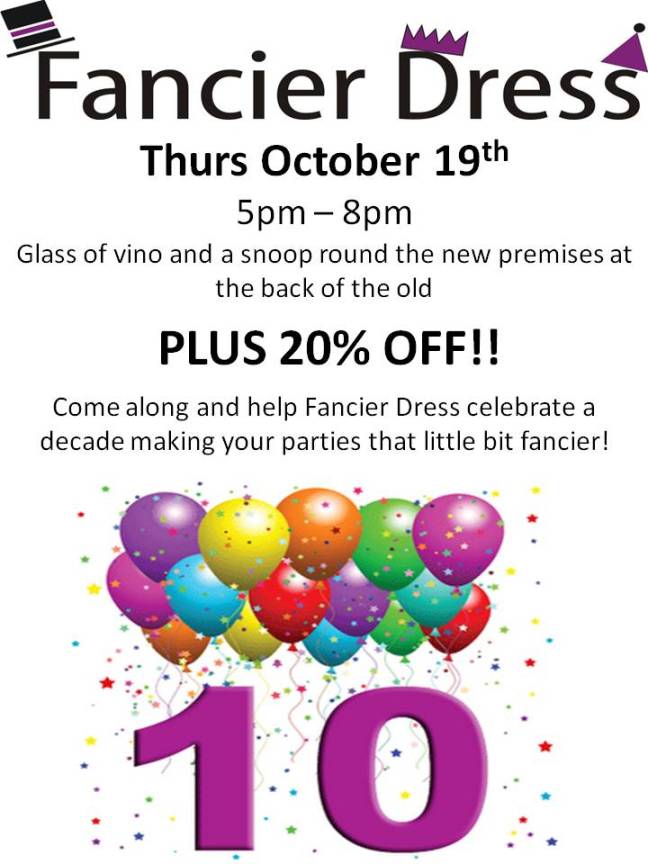