St Peter’s Church Parish News is 30 years old this year.  Whether you’re a member of the St Peter’s congregation, a staunch atheist, or somewhere in between, the little Parish News magazine that pops through the letterbox at the beginning of every season always contains interesting articles, what’s on and valuable info on community goings-on.

In 1987 – yes 1987 was actually 30 YEARS ago (how old do you feel now?!) – we were still at the very beginning of the internet era… I certainly didn’t have an email address or my own computer. Our computer lessons were mainly about using a keyboards and typing in code we didn’t understand…If you had a computer at all, it was likely to be pretty weighty and not connected to the WWW.

1987 was a momentous year for many reasons:  It was the last year of O’Levels; the year of the Wall Street Crash and the Zeebrugge ferry disaster; the Synod gave female priests the nod; Terry Waite was captured and imprisoned in Beirut; Maggie won her third term; the Hungerford shooting killed 14;  an IRA bomb kills 11 at Enniskillen; British Caledonian and British Airways merged for £237m; Lester Piggott went away for 3 years for tax evasion; Lynne Cox became the first person to swim from the United States to the (then) Soviet Union and the search for the Loch Ness Monster ended… Yes it was truly the end of an era for some, but the dawn of the Limpsfield Parish News era 😉

What’s in the Spring Issue? 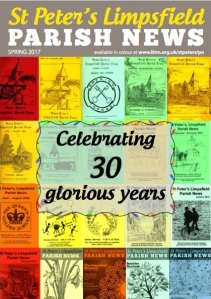 Plus the usual news from clubs and societies around our lovely parish.

As part of the Parish News’ 30th Anniversary celebrations, you can now download the first three editions of this incarnation of the Parish News by clicking HERE. You’ll realise just how much some things have changed… and others have not!

For the online edition of the Spring issue, click HERE.